Since it was first published in 2001, the original MoReq® has been used widely in many different languages across Europe, and beyond. Throughout the European Union, prospective users and practitioners of electronic records management have recognised the value of using MoReq® as the basis for procuring records systems while suppliers have responded by using MoReq® to guide their development process.

The MoReq® project is now regarded as an unqualified success. the specification has been cited many times on many continents and it has a central role in the electronic records management scene.

However, information technology has changed since 2001. There has been growth and evolutionary change in many technology areas that affect the creation, capture and management of electronic records. The original MoReq® has now had two major revisions. MoReq2® released in 2008, introduced a testing and certification programme. This was a significant step forward, as for the first time records systems could be certified as being compliant with MoReq®.

The recently released MoReq2010® continues to innovate and goes beyond any of the previous iterations. The main design goals of MoReq2010® include modularity and interoperability. Modularity is achieved by the specification of a minimal set of core services common to all records system. On top of this platform of core services, MoReq2010® can be extended and modified to address the specific needs of organisations in different sectors. To achieve this, MoReq2010® uses an innovative service based architecture, shown here. 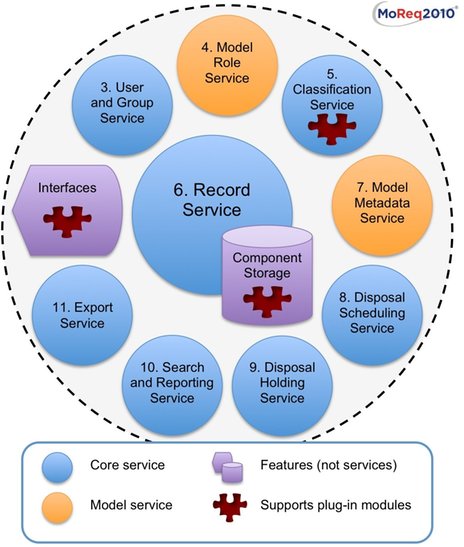